It was 1988 when Jason and Amy found themselves in a dilemma.  Jason had just graduated from high school and Amy was excited to begin her senior year.  They were young and in love when they discovered Amy was expecting.

“Since we were both raised in solid Christian homes, it threw our parents for a loop.  Honestly, it threw us for a loop too.” Amy remembered.  “I couldn’t believe that this was happening to us.  Jason offered to marry me, but I didn’t want to get married just because I was pregnant.  I didn’t know what to do, but I believed that I wasn’t ready to have a baby.” 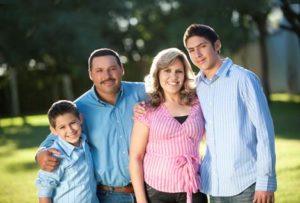 Jason and Amy celebrate 23 years of marriage with their boys.

After visiting a pregnancy center, viewing a video of an abortion, and collecting the facts, Amy was prepared to terminate her pregnancy even though she thought it was wrong.  With a marriage proposal on the table and an extreme sense of unease, Amy and Jason decided to seek counsel at Sheridan House.

Throughout their initial meeting, they weighed every possible option and decided to not only have the baby, but also get married and raise him.  With the support of both families, they moved forward and chose to never look back.  Knowing that they didn’t have all the answers, they continued seeking wise counsel for pre-marital, marital, and financial planning.

Raising their son was a family affair at first.  They moved in with Jason’s parents and both sets of grandparents helped with babysitting so Jason and Amy could continue their educations.  As they worked full-time and went to school full-time, they both graduated from college and eventually moved out as a happy family of four!

“I know we are blessed.  We beat the odds.  There were actually people who took bets on how long our marriage would last, but here we are 23 years later and we are still going strong.” Amy said.  “It is all because of God.  Without Him at the core, we wouldn’t have survived.  Plus, our families were an amazing support system to us.  We will continue to share our story because if it helps one more family, God will get that much more glory.”