Gregory was living in Brooklyn, New York, with his parents and six siblings.  He was attending school at P.S. 276 and was constantly in and out of trouble.  He entered the “system” in New York, but nothing was working.  Then his mother heard about Sheridan House from relatives in Fort Lauderdale. 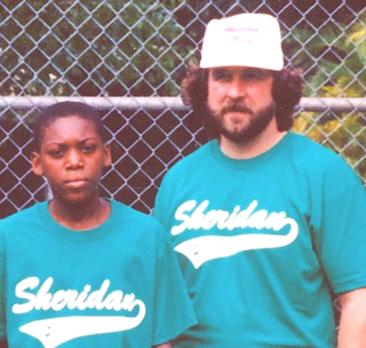 Gregory and Steve B. pose during a softball game.

After talking with us on the telephone, Gregory and his mom flew down to South Florida for an intake interview.  He was accepted into the program, but his mom had a tough decision to make.  In order for Gregory to attend Sheridan House, she would have to pick up everything and move to Florida with her seven children.  She decided that it was something she needed to do for both her family and her son.  It took time for Gregory to adjust, but he ended up doing extremely well and graduated from the program.

His first year after graduation however, did not go well.  Gregory became one of the rare boys who re-entered the program.  His second time through was much better than before and he developed into a fine young man.  After he graduated for the second time he went on to high school where he continued to learn and grow.  Gregory also excelled as a basketball player, eventually earning a scholarship to play at the University of Iowa.

After his freshmen year, Gregory decided that he wanted to concentrate fully on his studies.  He transferred to William Penn University, a Christian school founded by the Quakers.  He graduated with a double major in Criminology and Sociology and was offered a position back in New York.  After a short time he realized that something was missing.  He made the decision to move back to Florida to be with his family and to discover what God wants him to do next with his life.