When Josh first arrived at Sheridan House, he was a withdrawn, sullen boy.  He wouldn’t look anyone in the eye, much less engage in conversation.  Everything about him, from the way he sat in his seat to way he walked, said the same thing, “Leave me alone.  I don’t need anyone.”  He was a boy who had put up walls all around him.

Now fast forward to the end of the boys’ summer program 2010.  Each summer, the boys conclude the program with Championship Week.  One of our most popular events is the Ironman Obstacle Course.  This course is designed to test each boy’s speed, dexterity, coordination, and courage.  “The Wall” is one of the most intimidating and challenging portions of this course, despite being only eight feet tall.  As the boys approach it, it becomes daunting to many of them.  They each have to decide to quit or take a risk and conquer it. 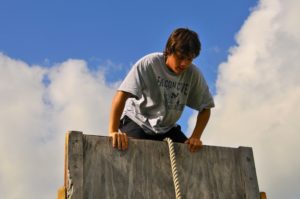 If we had held the Ironman when Josh first entered the program, he probably would’ve refused to participate.  Josh felt safer behind his walls.

However, when the Ironman Competition began, Josh had a fire in his eyes.   As he started down the zip-line, it quickly became evident that he was determined to not only complete the course, but also to give it his best effort.  Where most boys hesitated, Josh charged forward.  As he cleared the wall, we all realized this wall was not the only wall that Josh had conquered.