The boys were still in their first week of school when we received a call from the assistant principal.  As usual, the call was about Derek.  In spite of the fact that he made strides during the summer program, we figured he must have picked up where he left off at the end of the year.  Last year, it seemed Derek was suspended more than he was actually in school.  Whether it was because of his defiance, starting fights with other students, or simply walking out of class, Derek was constantly causing trouble at school. 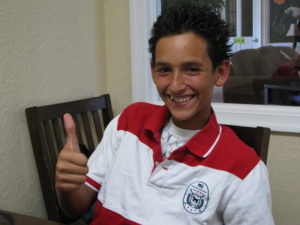 Smiling Derek flashes a "Thumbs Up" for making a wise choice.

Imagine our pleasant surprise when the assistant principal said, “Derek is having a great week!  I just wanted you know how proud we are of him.”  She went on to tell us how another student attempted to start a fight with him and Derek immediately chose to walk away.  She explained that as Derek walked away he told the student, “This fight isn’t worth getting into trouble.”

Later that evening as we celebrated this accomplishment with Derek, we told him how proud of him we were.  “I was pretty proud of myself, too,” he said with a smile.  Whether they grow by leaps and bounds or by taking baby steps, it is a privilege to share these victories with the boys.

KelseyCurran2010-09-23T20:57:05-04:00
Page load link
We use cookies on our website to give you the most relevant experience by remembering your preferences and repeat visits. By clicking “Accept All”, you consent to the use of ALL the cookies. However, you may visit "Cookie Settings" to provide a controlled consent.
Cookie SettingsAccept All
Manage consent