When Shane arrived at Sheridan House he barely spoke above a whisper.  In a house filled with boys all striving to be heard, there sat silent Shane.  With a slow to speak and slow to act quality about him, making connections with others in the home was going to take some time. 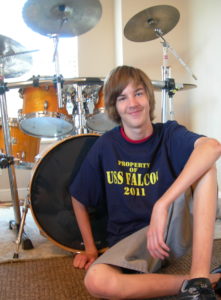 Shane takes a break from drumming to pose with the Boys' Home 3 drum kit.

Shane’s home life was turbulent.  He was withdrawn.  His academics were suffering.  He hid behind silence as a means to escape.  As he worked diligently to change his social and academic behaviors, he began to develop leadership skills and confidence.  Whenever Shane decided to speak, it was well worth the effort to listen.  Shane has a distinct ability to hear the “still small voice” that comes directly from the Heavenly Father.  He knows how to be still and know that God is God; and he is comfortable in his uniqueness.

What’s truly remarkable about the nine months Shane spent at Sheridan House is that not only did he find his physical voice, but he also learned how to communicate with others through his passion for music.  As quiet as Shane is, he quickly learned that he is a beast on a drum kit.  His timing is impeccable, his dynamics are powerful, and his style is original.

We are so proud of Shane.  He entered Sheridan House as a quiet boy, but he graduated as a strong silent young man who has a keen sense of who God is and who he is in Christ.  The music God has placed in his heart resonates God’s goodness and we trust it will not go unheard.