When Elijah came to the Sheridan House just a few months ago one of the first things everyone noticed (aside from the fact that he was a foot taller than all other 6th graders) was how sad he always seemed to be.  He always had is head down and walked slowly.  He quickly picked up the nick-name “Eeyore.”  His mom reported that just before entering the program, Elijah had bashed his head against a wall and said “I want to die.” She also reported that every weekend, just before returning to Sheridan House, he would cry and beg her not bring him back to the program.  “Mom, I’ll never be able to do all those things they want me to do,” he said. 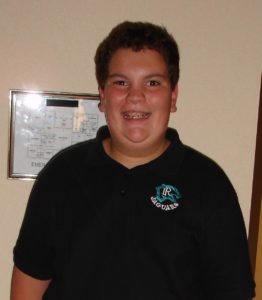 Elijah smiles as he recalls all of his accomplishments.

After a few weeks, with his mom remaining firm in her commitment to the program, Elijah stopped the weekly “drama” and began to accept the fact that he would have to start being responsible for his choices.  It did not happen overnight, or even from one week to the next, but gradually Elijah started smiling more.  He began joking around with the staff members and even started coaching some of the newer residents of the program on how to take on responsibility.  Not surprisingly, many of the changes he was making coincided with his new found success at completing his school assignments, daily chores, and other program goals.

Last week, Elijah was laughing and goofing around with the other boys in the program after his team won the weekly basketball game.  “Man I can’t wait till August,” he said.  “Why?” asked one of the other boys. “Because, I’m going to graduate right after the summer program!” he replied.  His behavioral specialist couldn’t help but ask, “I thought you’d never be able to do ‘this stuff’ Elijah?” He just smiled.