One of the saddest things I relinquished as a single mom was being able to be available every second of every day for my children.  I wanted to be that stay-at-home mom who greeted her children with healthy snacks and had energy to help with homework and special projects…the mother who was the neighborhood block parent!  I felt robbed of being a “real mom” when I had to work several jobs.

I prayed for God to provide a way for me to be able to somehow stay home to be there for my boys.  Year after year I prayed this prayer.  I never gave up on this prayer being answered. 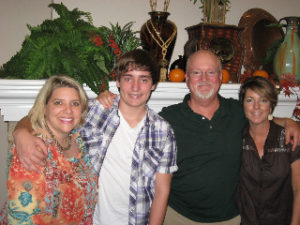 Cynthia and Christopher Seely celebrate the change in Christopher's life along with house parents, Steve and Teri Griffith.

When I noticed my son Christopher’s behavior slipping, I prayed again to God, “Lord, if I could just stay home and be there with lots of energy to be the best parent for my child, perhaps he would behave better.”  Guess what?  God answered my prayer.  I was let go from my job.  This was obviously not how I wanted that prayer to be answered.  After many weeks of trying to be the best mom for him, I realized that I needed to allow God to parent His child.  I was guided to Sheridan House.

I remember the first few interviews at Sheridan House when I was applying for my son to be in the residential program.  Even though I knew it was the right thing to do, I had feelings of despair.  I wondered how our situation was ever going to improve.  I questioned whether it was right to allow my son to live somewhere else five days each week.  I contemplated if I was making the correct decision to let others discipline my child with what seemed to be quite rigid rules.

Well, we began the program.  I say “we” because it was not only my son that was making this commitment; it was the entire family along with God’s guidance!  The first few weekends Christopher was home were disappointing.  I was not expecting perfection, but I was hoping for an improvement.  This was not the case.  As a matter of fact, I thought I had made the biggest mistake in my life!  Weeks turned to months and I was still grading my son on the weekly blue sheet with many zeros.  Several vacations rolled around.  This meant that my son would be home for more than a weekend.  He was home for one or two weeks at a time.  At some point, I found out that I was leading in grading my child with zeros for the holidays.  Way to go mom!  What was I doing?  Was I helping him?  Was I crushing his spirit?  What was he going to do?  What will this outcome be?

When I had with these thoughts, I would be encouraged by his house parents, Teri and Steve Griffith.  They came alongside me countless Friday and Sunday evenings with optimism.  “Be consistent.  Keep it up.  God has a plan!”  Teri told me that there would be ups and there would be downs.  They always took the time to speak to me about any concerns I had…and I always had questions and concerns.  Nearly every week I was the last parent to leave.

Throughout the months, I attended the Thursday night parent meetings.  It was a long drive, but I knew that I needed to do my part in learning and growing as a parent.  Many weeks, I learned from Brian Vann how to be consistent.  Brian often made football analogies to help us understand how to parent from a coach’s perspective.  Brian did not always give us the answers to our questions on how to parent which frustrated me at times.  I just wanted the formulas on how to do it.  I wanted answers like the book What to Expect When You Are Expecting gave me years ago!  As Brian said though, each child is an individual and needs to be parented in the way that is most effective for him/her…and I knew he was right.

Then it happened.  I had a weekend of grading my son with no zeros…then another and another.  This wonderful upswing happened nearly a year into the program.  My son had a heart change.  He was respectful.  We began laughing and having fun together.  We began to enjoy one another.  He was back!!!

I was asked to write of my experience at Sheridan House months ago not knowing when my son would graduate.  It was due yesterday.  I am a day late in my submission, but they accepted it anyway.  It turns out that I am not a day late at all.  In fact, in God’s incredible timing, I am writing this note on the day of my son’s graduation from Sheridan House!  It is a great day!