A note from a great single mom

A note from a great single mom

On February 22, 2009, I surrendered my life to Christ and was baptized on Easter.  On March 1st, Sheridan House gave me my first Bible.  As a single parent of two boys, that was the first time I realized I had direction for my life.

Then came the testing time.  Just three weeks ago, I was driving an old, beat-up minivan with bald tires, no second gear, no A/C, and a leaky radiator that overheated every twenty minutes or so.  On my way to and from work, I would have to stop and put more water in the radiator.  The van was rusted and also had roof leaks.  So, when it rained outside; it rained inside too.  When it got hot, the carpets got steamy and the smell was just awful. 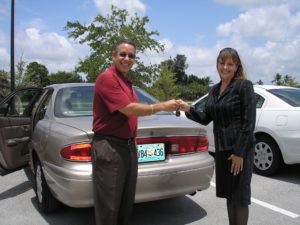 Dawn receives the key to her new car from Pastor Jose Santiago of Hollywood Community Church.

Recently, I broke my leg and was on crutches for six weeks.  That meant on my way to work, I had to pull over, get out with my crutches, open the hood, “crutch” back to the passenger side to get the gallon of water, then limp back and fill the radiator.  I knew this was part of my testing of faith, but it was tough.  I just focused on the fact that I was grateful to still have a job and that I was able to get to my destination.

Three weeks ago, my church partnered with Sheridan House and together they gave me a new car – new to me anyway – a 2000 Buick Century…without leaks and with air conditioning!  It’s the first time I’ve had a car with air conditioning in months.  I am so grateful to God for what He has done in my life this year and for what He will continue to do for me…He really is a Father.

KelseyCurran2010-08-30T14:57:10-04:00
Page load link
We use cookies on our website to give you the most relevant experience by remembering your preferences and repeat visits. By clicking “Accept All”, you consent to the use of ALL the cookies. However, you may visit "Cookie Settings" to provide a controlled consent.
Cookie SettingsAccept All
Manage consent