When Andy entered the Sheridan House Residential Program, he was struggling in just about every area in his life.  He didn’t get along with or respect his parents, he refused to follow the rules at school, and he wasn’t even attempting to “work” our program.  In fact, he had such a difficult time with the structure of our program we didn’t think he would last long. 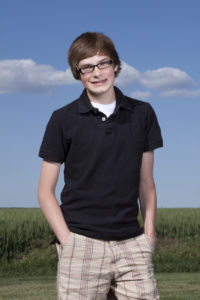 Andy smiles knowing his future is bright and in God's hands.

Fast forward a year.  How did this kid who was failing at everything begin to change his attitude and his actions?  What made the difference?  Some may say it was the consistent consequences that finally broke his will or the fact that his parents learned how to embrace the structure and lovingly implement it at home.  Others may think it is due to the fact that he’s been here for a year and he is just tired and ready to comply.

We think the real reason Andy has changed is because he has become convinced.  Now, the Webster’s definition of convinced is; to bring to belief, consent, or a course of action (as by argument). Andy’s changed actions are a direct result of his changed beliefs.  However, those beliefs where not changed through a verbal argument; they were changed through a living argument.  He was changed by the One who is living inside those around him.  The living argument that has changed Andy is Jesus Christ.

Andy is now convinced that where he once was a burden; he is now a benefit. Though he once felt unwanted; he now knows he is loved.  Though he understands he makes mistakes; he now believes he is forgiven.  The reason Andy has changed is because Christ has changed him by convincing him that he is forgiven, loved, and valued.

It has been a pleasure and privilege watching Andy change.  He no longer focuses on where he is, but on how far he has come and, more importantly, where he is headed.